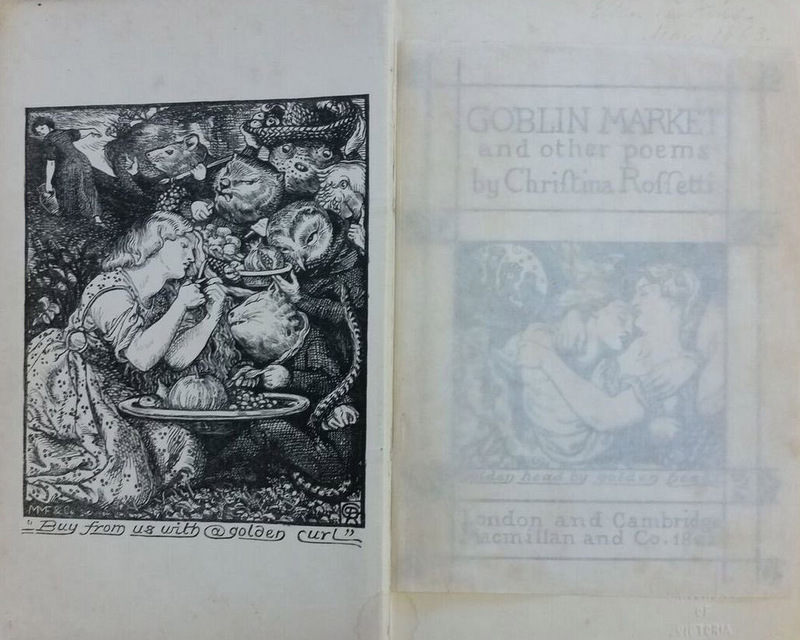 The frontispiece woodblocks of Goblin Market (1862) depict the sisters featured in the story. They are rendered with a characteristically Rossetti style, specifically in the intense emotion and the flowing hair and garments of the ethereal figures. Rossetti’s illustrations do not simply refer to the text in which they appear; rather, they are part of a bigger program of art: the book as a whole.

Rossetti’s philosophy about the role of illustration was revealed in an 1855 letter to poet William Allingham, when he wrote, in reference to illustrations: “I have not begun even designing for them yet, but fancy […] those where one can allegorize on one’s own hook, without killing for oneself and everyone a distinct idea of the poet’s.” [1] 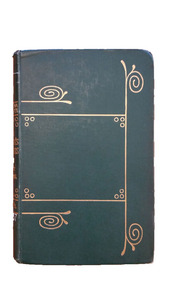 Binding from Rossetti, Christina. The Prince’s Progress, and Other Poems (with Two Designs by D.G. 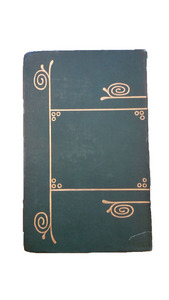 Dante Gabriel Rossetti designed the illustrations and bindings from this 1866 edition of The Prince’s Progress, again written by Christina Rossetti.  A book’s binding is the first element in the sensory experience of reading. Bindings point to the artistic nature of a book as a whole, and this can be seen in Rosetti's design. Rossetti disagreed with the gaudy ornamentation of many Victorian books, and thus attempted to refine the heavily ornamented book with his own bindings. In this publication, he employs a combination of minimalist motifs and contemporary technology, seen specifically in the gold stamping. The hand and machine work of this design ensured the perpetuation of Rossetti’s aesthetic through wider accessibility.

The gold design makes reference to clasps and nailheads on medieval books,  and it is repeated on both the cover and back of the book [1]. Like illustration, this binding has an integrated role in the art of the book as a whole. In addition to the medieval allusion, the organic motifs reflect the theme of growth and change within the text. In this way, the binding becomes a part of the narrative. 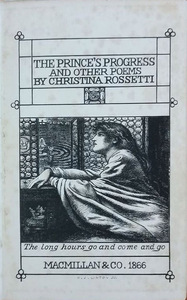 The binding refers to the general layout of the title page illustration on the right, again uniting it with other artistic components.

← The Epitome of Pre-Raphaelite Book Arts: The Moxon Tennyson
William Morris and the Kelmscott Press: The Pre-Raphaelite Legacy →
Illustration & Bookbinding