The Epitome of Pre-Raphaelite Book Arts: The Moxon Tennyson 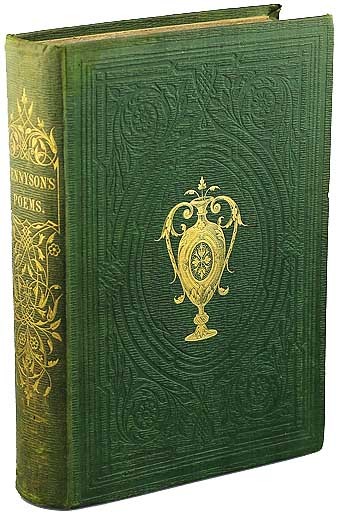 British publisher Edward Moxon (1801-1858) approached Alfred, Lord Tennyson (1809-1892) as early as 1849, seeking to collaborate on an illustrated edition of early poetry [1]. Moxon envisioned Royal Academicians as the illustrators for the ambitious project, but this vision was quickly disrupted once John Everett Millais, a founding member of the Pre-Raphaelite Brotherhood, became involved in the project [2]. Millais recruited William Holman Hunt and Dante Gabriel Rossetti (the brotherhood’s other two founding members) for the project, and the involvement of these artists reshaped the entire production of Tennyson’s Poems. The book featured illustrations from other Victorian artists who were outside of the Pre-Raphaelite circle, but comparatively, their contributions are largely ignored. Moxon wanted to publish a successful, artistic book for the Christmas gift book market of 1853. The recruitment of Royal Academicians ensured its success, and its ‘guaranteed’ sales were meant to offset Moxon’s huge costs accrued by paying both artists and engravers [3]. Once the Pre-Raphaelites ‘got hold’ of the project it became an economic gamble for Moxon, and the end product differed greatly from the original vision. Some years after the book’s completion, contemporary writer Laurence Housman stated:

“[...] The illustrations of the Pre-Raphaelites were personal and intellectual readings of the poems to which they belonged, not merely echoes in line of the words of the text" [4]. The Pre-Raphaelites’ visualization of Tennyson’s poems indicated the range of possibilities in interpreting written works, as did their unique approach to visualizing narrative on the canvas [5]. Pre-Raphaelite illustrations do not simply refer to the text in which they appear; rather, they are part of a bigger program of art: the book as a whole. Rossetti’s philosophy about the role of illustration was revealed in an 1855 letter to poet William Allingham, when he wrote, in reference to his work on the Moxon Tennyson:

“I have not begun even designing for them yet, but fancy I shall try the Vision of Sin, and Palace of Art, etc.—those where one can allegorize on one’s own hook, without killing for oneself and everyone a distinct idea of the poet’s.” [6]

This passage makes apparent Rossetti’s desire not to just support the poet’s narrative, but to create an allegorical illustration that functions separately from the text as well. In this respect, Pre-Raphaelite illustrations go beyond depicting an episode from a poem, but rather function like subject paintings within a text. The illustration is not subservient to text and vice-versa. Careful and conscientious craftsmanship is practiced in every aspect of production, and each element, though qualifiedly artistic in its own right, contributes to a unified art object (the book). Though seemingly distinct, various forms of Victorian media incorporated each other into their representation. The Moxon Tennyson is a sum of its individual parts, and the layers to its embodiment relate to its various collaborators. The growing middle class created an increased demand for domesticated art—the wood-engraved book [7]—and in the case of the Moxon Tennyson, it proved to be a safe access point to the Pre-Raphaelites and the range of media with which they practiced. The publication combines utility and ornament, and its poetic and illustrative messages penetrate the body through visual and tactile means. The Moxon Tennyson encapsulates many facets of Pre-Raphaelite artistic practice, from collaboration to philosophical approaches, and the multi-sensory engagement of the book itself parallels the Pre-Raphaelite idea of embodiment through art. There is continuity between this earlier Pre-Raphaelite project and William Morris’ Kelmscott Press, as well as Rossetti's poet-illustrator collaboration with his sister Christina (Goblin Market, 1862 and The Prince's Progress, 1866). Notably, Morris also had similar sensory considerations in the book designs of his press and his furnishing and decorative arts company, Morris & Company. 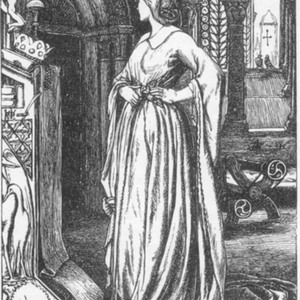 Godiva by William Holman Hunt (from the Moxon Tennyson, 1857) 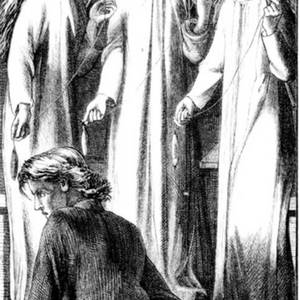 The Maids of Elfen Mere by Dante Gabriel Rossetti (from the Moxon Tennyson, 1857) 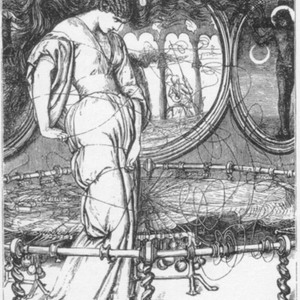 The Lady of Shalott by William Holman Hunt (from the Moxon Tennyson, 1857)

Mariana by John Everett Millais (from the Moxon Tennyson, 1857)

4. Laurence Housman, Arthur Boyd Houghton: A Selection from his Work in Black and White, (London, UK: Trubner and co., 1896), 13, as quoted in Kooistra, Popular Publishing, 43.

← The Sensory and Social Role of Victorian Books
Illustration & Bookbinding →
The Epitome of Pre-Raphaelite Book Arts: The Moxon Tennyson