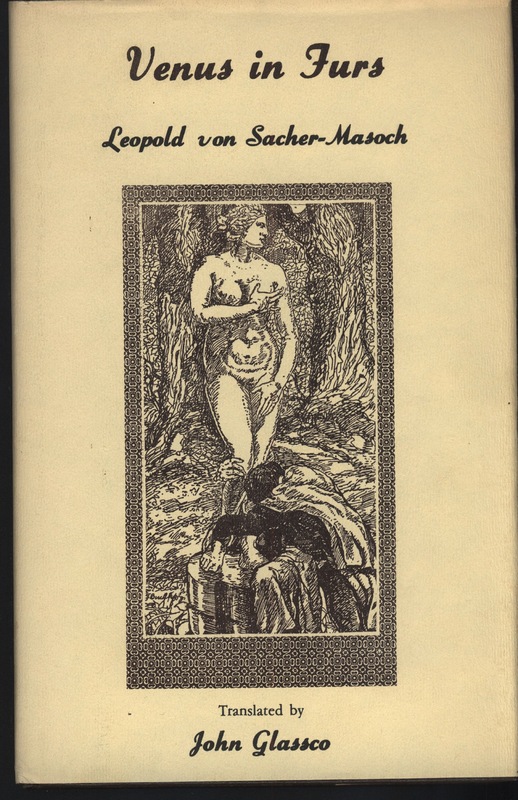 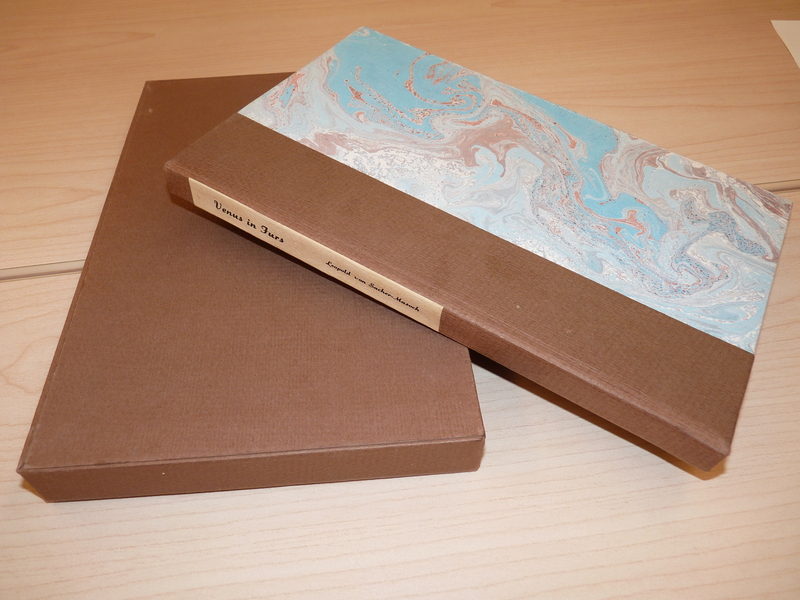 Twenty-six hardbound, marble boarded, slip-cased copies of this special series were lettered from A to Z and signed by Glassco as translator. University of Victoria Special Collections holds signed copy number four. 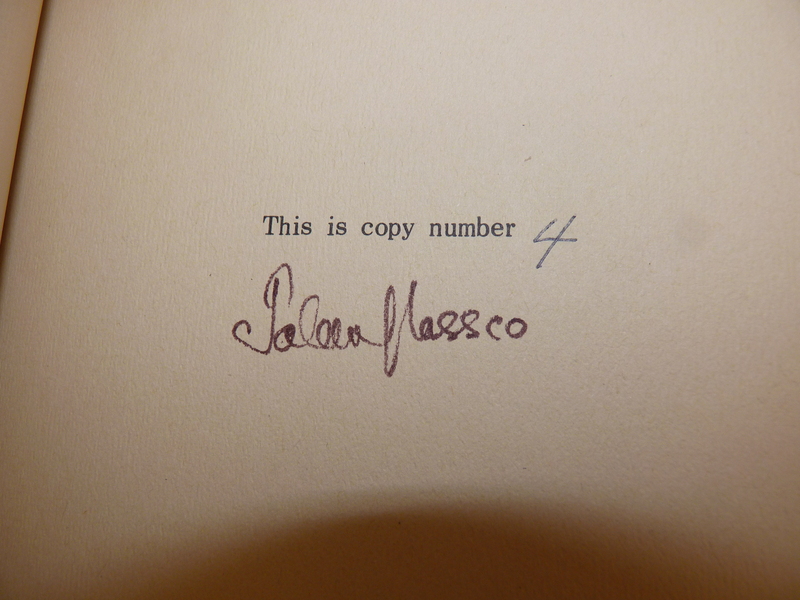 John Glassco's signature on copy no. 4 of 26 special editions.

"The translation, as always from Glassco, is of surpassing grace and delicacy”
~Brian Vintcent, Globe and Mail, April 1977

This page showcases a special limited edition of 26 hardbound, slipcased copies of Venus in Furs, lettered from A to Z, and signed by John Glassco as translator. This particular book is signed copy number four.

Special Collections & Archives houses this special, signed edition in addition to two others of a limited release of 1,500 copies of Glassco's translation published in 1977. Leopold von Sacher-Masoch's original German version was published in 1870 as Venus im Pelz.

Authorship, as defined in the Oxford English Dictionary- "the fact of being the author of a piece of writing; the fact of being written by a particular person; literary origin" - makes Glassco’s English translation of Sacher-Masoch's Venus im Pelz an interesting study where complications and questions of authorship arise in several ways. 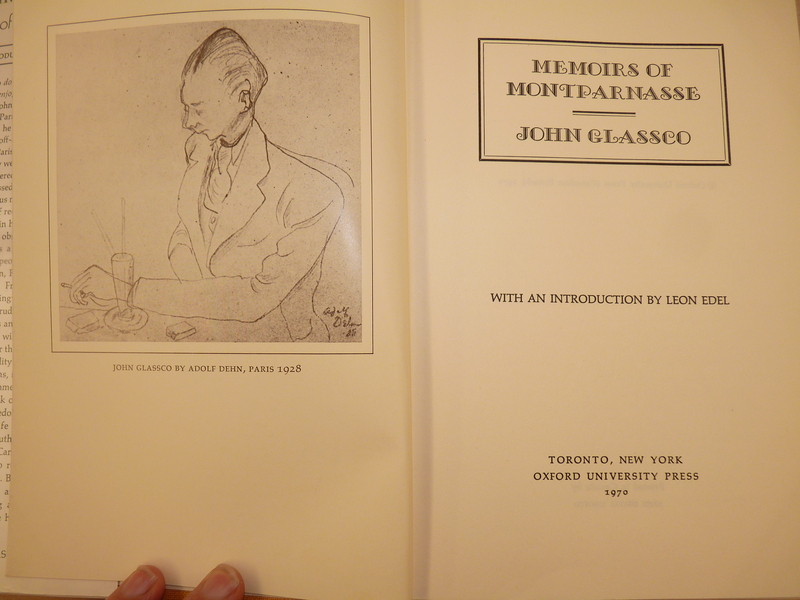 The conclusion of Glassco's introduction shows his name, the date (June, 1965), and place (Foster, Quebec) he translated Sacher-Masoch's work.

Brian Brett of Blackfish Press, the translation's publisher, has admitted his own suspicions as to the validity of Glassco's translation of Venus in Furs:

"You could never get the provenance of anything out of [Glassco]. I thought he basically just stole it. What he did was he looked at the translations and wrote his own. I don’t know if he ever actually looked at any German”
~ Brian Brett, qtd. in Busby 283

In fact, Glassco is a self-described “accomplished liar," and his biographer, Brian Busby, writes that “Glassco told a central truth when he described himself as an accomplished liar; he took delight in deceit” (6). It has been widely asserted that fabrication made its way into his Memoirs of Montparnasse, also available in University of Victoria's Special Collections. In his "Notes Towards a Sometime and Probable History of John Glassco" Michael Gnarowski writes of Memoirs: “Few, if any, of his happy readers were aware that they had been taken in by a curious notion on the part of the author which demanded that the entertainment he had created should be cloaked in deception” (1). Upon Glassco's death he left behind documentation that exposes his deceit, much of which is discussed throughout Busby's A Gentleman of Pleasure. These curious circumstances become key when considering “authorship” and Glassco's translation of Venus in Furs.

It was 1934 when Glassco originally discovered Sacher-Masoch's masochistic tale. In the introduction to his translation he states that despite the novel involving "flagellant and fetishist trappings. . . [it] evoke[s] our instinctive assent to a primitive poetic conception of the role of woman in both love and life" (Glassco ii). However, because of his lack of familiarity with the language, his interest in the novel let him to eventually seek out a privately printed English-language edition. His disappointment with this version, he called it a “vile bit of work,” led him on a mission to write a better English translation (Busby 283). While as a boy, Glassco had taken limited German lessons in school, the fact that he felt it necessary to acquire an English version brings his German translation skills into question. Some Glassco critics, including biographer Brian Busby, believe the translator had assistance from his German speaking wife at the time he wrote Venus in Furs. Busby's doubts as to the validity of translation are so deep that he refers to the work as a "supposed translation" (283).

Still, considering other opinions, such as that expressed by Brian Vintcent in the Globe and Mail quote above, there is no easy answer to the question of authorship in John Glassco's Venus in Furs. 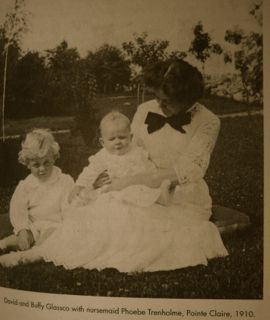 Childhood photo of Glassco with brother David and nursemaid, 1910. Included in Brian Busby's A Gentleman of Pleasure provided courtesy of UVic Libraries. 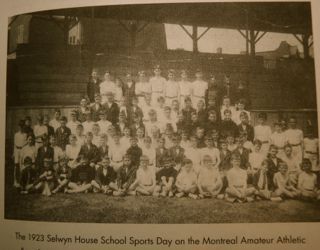 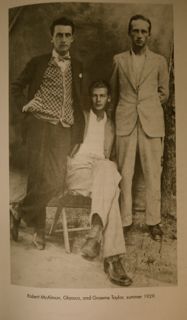 Photo of Glassco, Taylor, and McAlmon, summer 1929. Included in Brian Busby's A Gentleman of Pleasure provided courtesy of UVic Libraries. 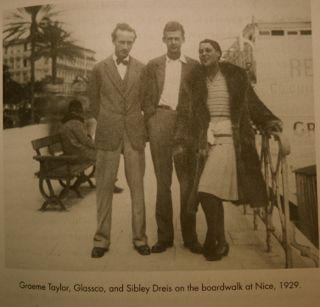 SUMMER IN PARIS AND THE TIME BEFORE: A BRIEF OVERVIEW

It is dificult to read Venus in Furs, with its proliferation of flagellistic pleasure and other masochistic eroticism, without making connections to the writer's young life. In A Gentleman of Pleasure, Busby includes testemony of specific troubling episodes from the writer's youth. Details are provided in Glassco's "Autobiographical Sketch," written much later in life, as well as from the testimonial by a young Glassco family neighbour who would later marry his brother David. These recollections reveal that as young boys, John and David both suffered violent physical abuse and sexual touching at the hands of their father and that the abuse and the boys' cries could be overheard through open windows.

"There is no doubt that my father was a sadist. . . the slow and protracted severity of the punishment. . . all these properly belong in some work of flagellantine pornography"
~From Glassco's Autobiographical Sketch, qtd. in Busby 22

Adding further trauma to the young man's life, in 1924, Glassco and his brother attended Bishop's College School, where the two boarded away from home. There Glassco suffered more abuse, this time by fellow students. He later recalled the torment of his "physical suffering" and his "first experience of being forcibly sodomised" (qtd. in Busby 25).

After some time spent at McGill University, where he "did little work, rarely attending classes, and barely passed his English examinations" (Busby 26). Glassco spent 1929-31 in Paris with Canadian bisexual partner Graeme Taylor, whom he originally befriended while at McGill. There the two enjoyed numerous ménage à trois affairs, some lasting months at a time.

In Published in Paris (a copy of which is also held in Special Collections & Archives) Hugh Ford writes that American author, poet, and publisher Robert McAlmon developed a special fascination with Glassco and Taylor, and counted them among his list of "café acquaintances" that included the likes of Morley Callaghan, Ernest Hemingway, and F. Scott Fitzgerald. He referred to the Canadian duo as the "bright boys from Montreal" and the "clever little devils"– affectionately of course (155). Despite McAlmon's endeavors to have work published by the two writers, and the fact that he considered Glassco and Taylor friends and included them into his social circle, Callaghan would later write in "Now That April's Here" that the two took great pleasure in "laughing and snickering at [McAlmon]" (156).

Ford also writes that "Now That April's Here" also uses its fictional characters based on Glassco and Taylor to detail a love-triangle that bears some similarities to real life affairs they carried on together with women. Callaghan's story includes a woman who comes between the two, described as "fat-faced" and having "short hair dyed red" (Ford 156). Interestingly, Busby discusses Glassco's involvement with a woman named Sibley Dreis (shown in the photo here). Glassco's descriptions of her from his Memoirs of Montparnasse, and an annotation he wrote, are that she was "a plump, black-eyed girl." Busby further relates Glassco's attraction to her "androgynous nature" (58).

Like many other writers who spent time in Paris during this period, Glassco recorded his "memories" from the time, in the form of Memoirs of Montparnasse. It was to be a similar creation to many of the memoirs produced by the "Paris Crowd," however, Glassco’s memoir has been exposed by many critics, including Busby and Gnarowski, as being tainted by numerous accounts of both exaggeration and fabrication.

Original illustration by Franz Buchholz from the 1870 edition. This one portrays Venus without her furs. 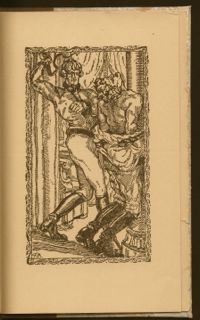 Original illustration by Franz Buchholz from the 1870 edition. This one portrays male-male sado-masochism/bound and whipped.

Original illustration by Franz Buchholz from the 1870 edition. This one portrays the protagonist bound and whipped by three of his mistress's servants.

FINDING A CANADIAN PUBLISHER FOR "PORNOGRAPHY": BLACKFISH PRESS, BURNABY, BC

Busby writes that, in Canada, there was very little reaction to any of the pornographic writings Glassco published. In terms of Glassco's most popular publication, Memoirs of Montparnasse, there is not even a Canadian edition (5). The lack of celebration in his home country likely made it difficult to find a publisher for Venus in Furs.

When Glassco translated Venus in Furs, he claimed in its introduction that censorship in England and the US had “discouraged professional, or even competent, translation" of Sacher-Masoch's story (i).

But, a Canadian company did step up to assist Glassco in getting what he believed was a good English translation of the original German version in the hands of readers who had not had access: Blackfish Press. A small press operated by Brian Brett and Alan Safarik, Blackfish was located in Burnaby BC.

Glassco’s translated edition put together by Brett and Safarik includes the original illustrations of Franz Buchholz from the 1870 edition. These drawings were so key to the collaborative efforts of Glassco and Blackfish Press, that their inclusion is highlighted on the title page to Venus in Furs. However, not every reader was a fan of the explicit sexuality detailed in Buchholz illustrations.

“Venus in Furs won’t do much for most readers. It is a 19th century curiosity elegantly printed here on fine paper with uncut pages to give it a fitting air of European decadence. The original drawings of Franz Buchholz are wretched and of such a mannered vulgarity as to be worthless from every standpoint”
~Brian Vintcent, Globe and Mail, April 30 1977

Included in the still images of the Buchholz illustrations showcased here, is one of the masochistic episodes in Venus in Furs. Here you can see Wanda, mistress to the narrator, Severin. In response to Severin's begging her to humiliate him, she has three of her “nigress” housemaids bind and whip him. 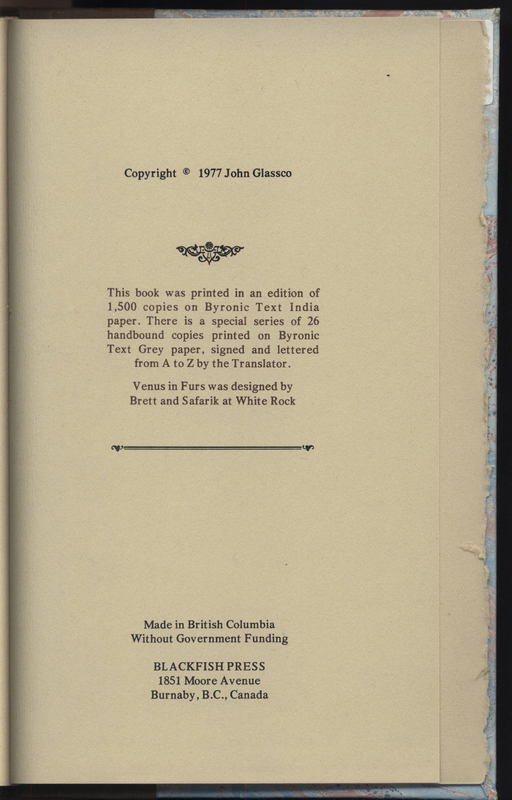 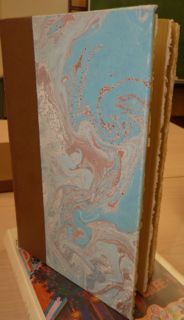 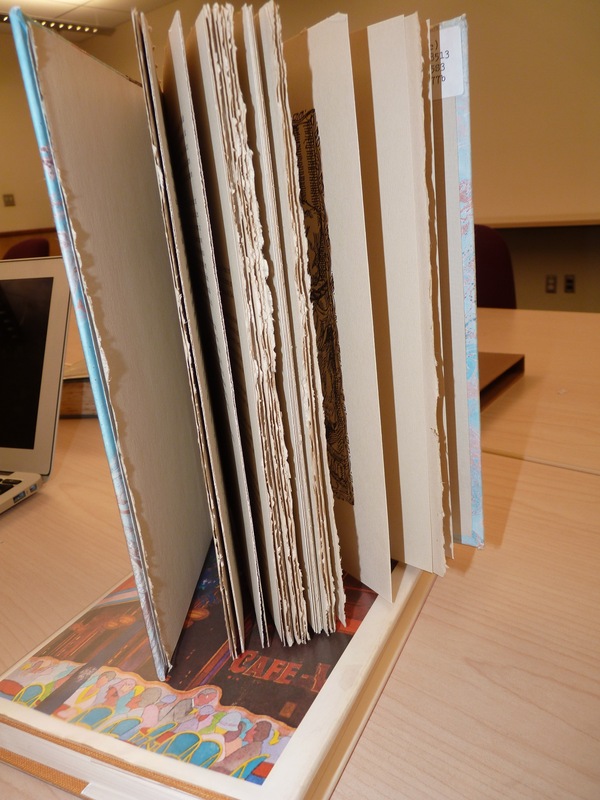 This image showcases the book's pages, many of which remain uncut.

PRINTED IN THE GYM OF FORMER "STRONGEST MAN IN THE WORLD"

As the still images included here display, Blackfish Press's Brett and Safarik desired, and worked to ensure, Glassco's version of Venus in Furs bear the nineteenth-century style of its original German version produced by Sacher-Masoch (Busby 284). This was not an easy feat to accomplish in Canada in the 1970s, especially considering the material and illustrations included.

This special edition, as can be seen, featured a beautiful hardbound marble boarded design that included a protective slip-case. Although it proved extremely difficult, Brett and Safarik ensured these copies would include the uncut pages of its previous century's production. The copy held in University of Victoria's Special Collections still has many pages that remain uncut.

It seems that finding a printer to produce the uncut style of pages was one of the largest inconveniences in producing Glassco's translation of Venus in Furs. At one point, Blackfish Press attempted to print the book through Evangelical Trinity Western College, however the initial acceptance turned to rejection when the Buchholz illustrations were discovered.

Finally, this edition was printed on a press owned by an Olympic weightlifter, Doug Hepburn. His press was located in his personal gymnasium and he had originally purchased it for label-making in his vitamin business (Busby 284). 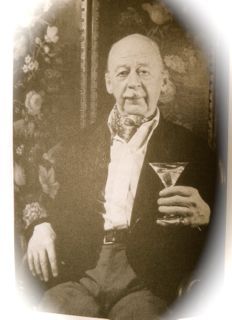 “Glassco was a man of many disguises. . . Yet, he chose to leave behind documentation that he knew fully well would expose his masquerade. . . [He] told a central truth when he described himself as an accomplished liar; he took delight in deceit”
~Biographer Brian Busby.