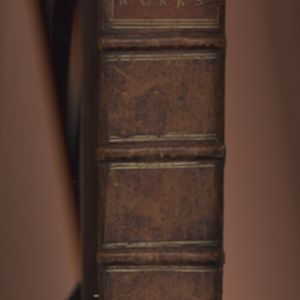 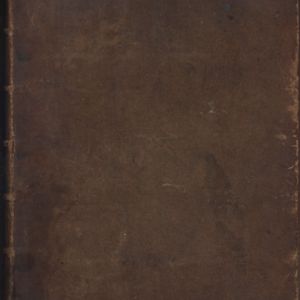 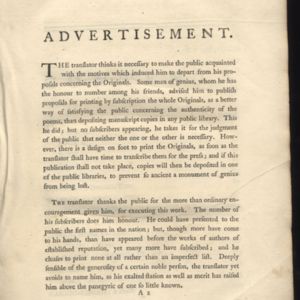 "Advertisement" at beginning of work. 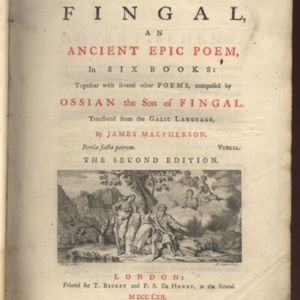 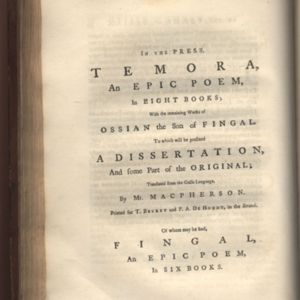 This page notifies readers that an edition of another Epic Poem, Temora is "in the press", i.e. about to be published. Note the publisher's promise that this next work will also include remaining poems of Ossian, as well as examples of the original (Gaelic) text, and a dissertation from James Macpherson, translator 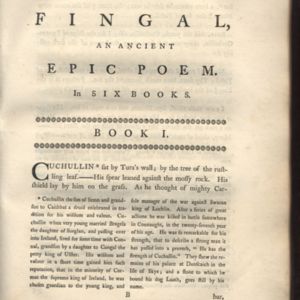 This book is an original second edition of the influential work by James Macpherson. Macpherson claimed that this work was his translation of third century Gaelic manuscripts from the poet Ossian, “the Homer of the North”, which had been preserved and handed down through the generations until discovered by Macpherson.  This work is credited with the revival of Scottish culture in the eighteenth century, but skeptics were many and included Dr. Samuel Johnson, who stated in a letter to Boswell, “If there are manuscripts, let them be shown, with some proof that they are not forged for the occasion” (Johnson 310). Macpherson never produced any manuscripts, and since then it has been postulated that Macpherson may well have listened to traditional tales from original Gaelic speakers, transcribed and then translated them for use as a true foundation which he then embellished with his own work. Recent work at Coventry University suggests however, that Macpherson’s entire effort was a fraud and that he lifted the stories entirely from thirteenth century Irish works. Special Collections at University of Victoria holds many editions of Poems of Ossian, including a very small pocketbook of an abbreviated version of Macpherson's Fragments of Ancient Poetry. Macpherson had promised in this 1760 work to publish more of his translations at a later time; the result was the 1760 work Poems of Ossian. 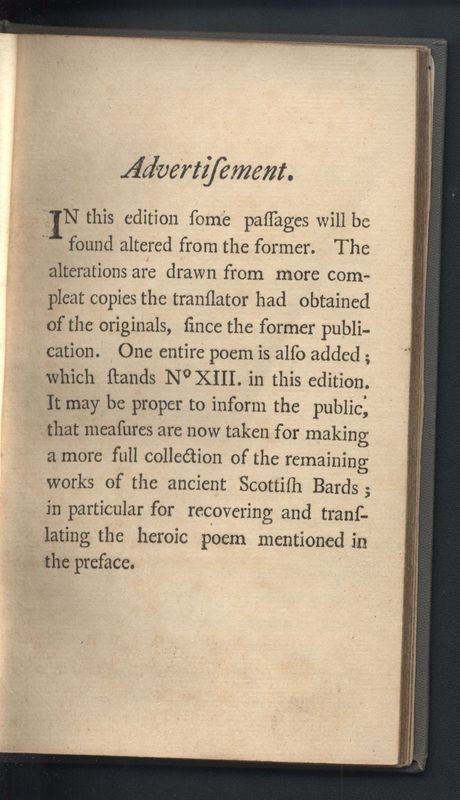 "Advertisement" page of pocketbook abridged version of Fragments of Ancient Poetry. Note the promise that "measures are now taken for making a more full collection of the remaining works of the ancient Scottish Bards".

Any serious scholarship on The Poems of Ossian is inevitably affected by the work’s controversial status as a literary hoax. Upon investigating the Ossian phenomenon, a researcher cannot help but become part of the phenomenon’s narrative: to interrogate Ossian is to interrogate the eighteenth century revitalization of Scottish culture, and cast doubt on the premise on which this revitalization was built.[1] The huge popularity of Ossian and its many translations in Europe during author James Macpherson’s time, as well as the proliferation of texts in the English language throughout the eighteenth, nineteenth, and twentieth centuries and their accompanying critical dissertations from scholars such as Hugh Blair, who assured the public of their authenticity, suggest that a variorum edition of The Poems of Ossian may prove to be an invaluable resource for scholars who are interested in questions of literary attribution, authorship, oral transmission, folkloric origins, and, as of very recently, what can be referred to as “network relationships” (Yose, Kenna and MacCarron 1).

[1] For this idea I am indebted to Dr. Cairns Craig of the University of Aberdeen, and comments he made during an English 500 seminar at University of Victoria on October 13, 2016.

Front cover of 1792 One Volume Editioon donated to Library by University of Victoria Professor of English Patricia Koster. 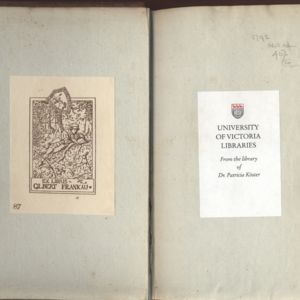 Scan showing bookplates of 1792 One Volume Editioon donated to Library by University of Victoria Professor of English Patricia Koster. 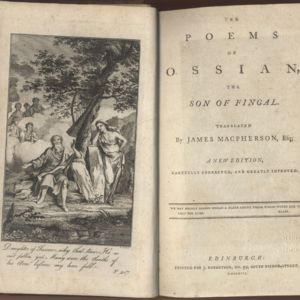 Title Page and Frontispiece of Front cover of 1792 One Volume Editioon donated to Library by University of Victoria Professor of English Patricia Koster.

Holdings in Special Collections demonstrate the diversity of textual variants of The Poems of Ossian. Besides the 1762 edition, sampled here are a two volume 1792 edition, a one-volume edition also published in 1792 as well as a 1776 edition in which Macpherson’s purported English translation was “now rendered into heroic verse, by Ewen Cameron”  (Cameron).

The one volume 1792 edition was owned and donated to Special Collections by Dr. Patricia Koster, a Professor of English at University of Victoria during the 1970's and 1980's. Notice the bookplates on the inside front cover of this edition.

Comparison of the Table of Contents in each of these editions shows that, while all six books of the poem Fingal are present in each of the editions, there are differences in the ordering ofpoems within each of those books. In the case of the one-volume edition of 1792, there seems to be an additional poem, Oscar, which is not included in the other three editions. A clue to this mystery can be found in the preface to this edition in which the unidentified author states:

"We have restored to this edition a poem of considerable length, and of distinguished beauty, which has been unaccountably suppressed by Mr. Macpherson in his edition of 1773, though, as it had been quoted in Elements of Criticism, by Lord Kames, its absence must have made a very sensible blank" (“Preface”  The Poems of Ossian 1792 Edition, Edinburgh)

This statement and others in the preface to this edition demonstrate that in Macpherson’s lifetime there was disagreement in literary circles as to which poems and which order constituted the most truthful rendering of the ancient voice of Ossian; these differing opinions help to explain the diversity and number of editions available during the eighteenth century and after. The unidentified author of this preface concludes his writing with an appeal not just to the reading public’s aesthetic taste, but also to their sense of economy:

"With respect to this Edition, we have little to say. Of an elegant type, and with a superfine paper, the reader is an equal judge with ourselves; nor can it be a circumstance unfavourable to our publication, that the Book is now to be sold at less than half its former price (“Preface” 1792 Edition).

It is amusing to consider that eighteenth century readers may not have been able to purchase books through Amazon, but, says the author of the preface, they could still have the finest edition of The Poems of Ossian, and save money too, if they bought that edition from J. Robertson of Edinburgh!

A cursory examination of the texts from the 1762 and both of the 1792 editions reveals little difference in terms of the actual text of the poems and in the critical apparatus; the main difference seems to be in the ordering of the poems as mentioned above. However the 1776 editions stands out from the rest due to Ewen Cameron’s adaptation into heroic verse. 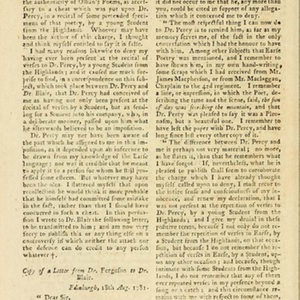 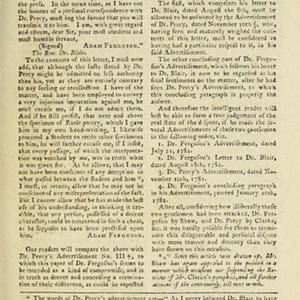 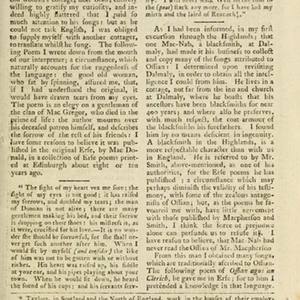 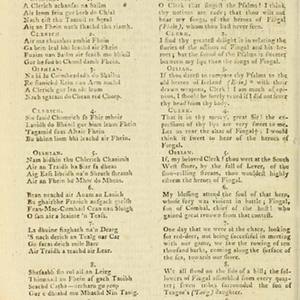 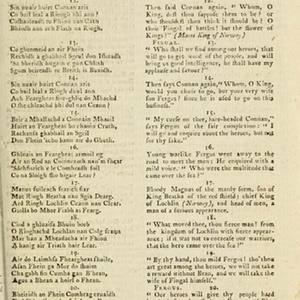 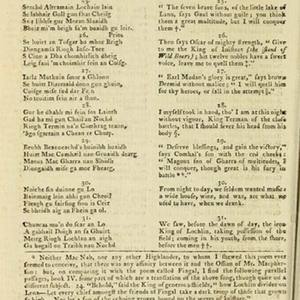 There have been attempts to gather into one place digital versions of The Poems of Ossian. The stated aim of the website ossianonline.org is “to publish the various editions of the sequence of eighteenth-century works known collectively as the Ossian poems” (Ossian Online). Efforts in this direction seem to have fallen off: the last blog entry on the site was almost a year ago. However the team responsible for the site has been involved in a collaborative study of the “network relationships” of the characters in Ossian and produced results which may confirm Ossian’s hoax status (Johnston).  The National Library of Scotland has a large Ossian Collection at <http://digital.nls.uk/early-gaelic-book-collections/pageturner.cfm?id=76750236>.The gallery to the left exhibits pages from volumes 52 and 53 of Gentleman's Magazine and shows an exchange of letters debating the authenticity of the poems between one Mr. Ferguson, and Dr. Hugh Blair, a great champion of their authenticity.

Johnston, Ian. "Ossian, the ‘Homer of the North’, and the truth behind the world’s greatest literary hoax." 20 October 2016. The Independent Online Edition<http://www.independent.co.uk/arts-entertainment/books/news/ossian-literary-hoax-james-macpherson-fingal-mathematics-social-network-study-a7371806.html>.Accessed . 21 October 2016.

—. The Fingal of Ossian : an ancient epic poem in six books / translated from the original Galic language, by James MacPherson and now rendered into heroic verse by Ewen Cameron. Printing Location not listed: Warrington : Printed by W. Eyres, 1776.

—. The poems of Ossian : the son of Fingal / translated by James Macpherson. New Edition. Edinburgh: Printed for J.Robertson, 1792.

← Authorship
Wilkie Collins - The Woman in White. Serialized in All the Year Round, Edited by Charles Dickens. (1859-60) →
Authorship
Poems of Ossian Second Edition (1762)